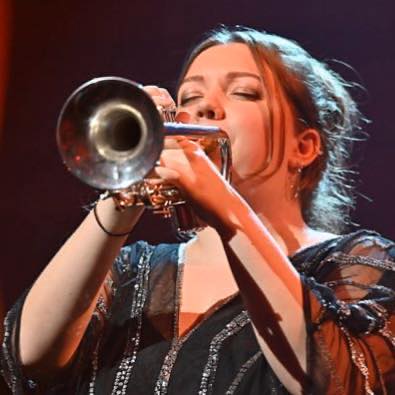 Jazz from the Great American Songbook

Alexandra Ridout began playing the trumpet at age 9. At 14 she began studying at the Royal Academy of Music Junior department. In 2015 she was one of only two UK students to be chosen to attend the Brubeck Institute’s Summer Jazz Colony at UOP in Stockton, CA.

Alexandra has received many awards including The BBC Young Musician Jazz Award 2016, the British Jazz Awards ‘Rising Star’ 2018 and was a nominee for the Parliamentary Jazz Awards in 2020. She performs nationally with many bands including her own Quintet and has recently released her own EP of original duo music with guitar called ‘Remote duets’. She is currently studying jazz performance at the Royal Academy of Music.

Noah Stoneman is a 20 year old pianist and composer from north London. He is currently studying at the Royal Academy of Music and is adept at a wide range of musical idioms. What binds these different languages together is improvisation; the art which Noah aims to master throughout his career.